DALLAS Y HONORS 18 DADS WITH FATHER OF THE YEAR AWARDS 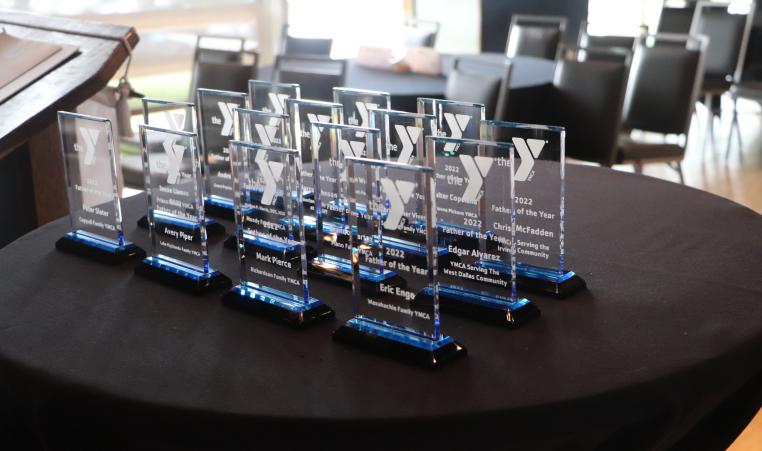 Each year, the YMCA of Metropolitan Dallas celebrates the anniversary of Father’s Day by honoring local Dads as the YMCA Fathers of the Year. These Dads are honored at their local branches along with an association-wide evening celebration of family fun.

The YMCA of Metropolitan Dallas established the “Father of the Year” award to recognize the significant impact fathers make in the lives of their children.  Each year, the Dallas YMCAs accept nominations from family members in each local community who wish to honor a father with this special award. Each local YMCA chose a “Father of the Year” from their community.

On June 16th, the YMCA of Metropolitan Dallas honored 18 local dads as the YMCA Fathers of the Year in their communities. Congrats to the following fathers for making a significant impact they make on their children and their community:

Peter Slater has been a volunteer for the Coppell YMCA since 2017. He has poured many hours into fostering positive relationships with families and players.

Peter says he is so proud to be the dad of Paige, Hunter, and Peyton and believes the best part of being a dad is helping each of his kids create their path in life.  He also appreciates them teaching him the latest trends on Social Media or the History of Pixar and Disney or how to play Fortnite.

William’s wife said she believes he should be awarded father of the year for setting such a positive example in everything he does. He is a friend to all and desires to help anyone in need. He donates a large portion of our income and his time to those in need.

William says he is finally getting their starting lineup complete with his 11th kid on the way. Teaching them the importance of integrity and strong moral character, and then witnessing them out in the world following through on these teachings is one of the most rewarding experiences.

Jesse has been an active member of the Frisco YMCA since 2010. With the little free time he has away from being the President of the Dallas Sidekicks, he works out with his two sons at 5:30 am every morning! He has been instrumental in creating a partnership with the Dallas Sidekicks to provide high-quality soccer training and camps for other kids in the Frisco community.

Jesse says the best part about being a dad is molding his kiddos into good human beings.

Andre has shown amazing strength while coaching many young athletes towards just a not winning goal, but teamwork and dedication. He has become a requested coach for many parents because of how he shows the young athletes the best parts of the game and themselves.

Andre said he prides himself on making sure they know that he will always be there for his sons and letting them know that they are good enough. Seeing the smile on their face lets him know that he is doing his job as a father!

Marvin says the best part about being a dad is teaching his kids everyday things, including having morals in all that they do. He loves to provide them with experiences, such as YMCA sports where I can participate in their growth in development in sportsmanship. He loves how goofy they can all be, especially on car rides. They remind him of when he was a kid. It is fun to watch their moments of pure joy and are 100% in the moment.

Avery’s sister-in-law said he is a true father to his daughter but takes on the role for her children as well. She is a single mom of 3 girls and one foster son and Avery has attended all of their sporting events and stepped up to coach when there was no one else willing.

Avery says he loves being someone his family can depend on, being a provider, and supporting his girls in any way possible! He says his girls can be so funny at times it's unbearable!

William, age 5, said “I think my dad should be the YMCA father of the year because:  He loves me so much!  He lets me hang out with him and watch movies in his man cave.  He makes me yummy guacamole.  I like when my dad takes me to the YMCA. He is really good at playing hockey.  He makes me laugh when he tickles my armpits.”

Andre loves being a father because seeing his boys develop and discover new and exciting things brings him great joy.

Dr. Nathan Harris is the epitome of a role model for fathers everywhere. A devoted husband and father of NINE beautiful children, Dr. Harris raises his kids with dignity and respect. Dr. Harris runs a highly successful practice, Harris Orthodontics, which has donated to the Moody Family YMCA for many years and has a consistent banner in the gym. He also uses the YMCA to train for one Iron Man Triathlon each year, and his family supports him during his training. He will compete in the Ironman World Championships in Hawaii next year.

Marcus is family first.  He models the behavior he wants his children to see when it comes to building a better community.  Marcus coaches his daughter’s sports team and involves her in his volunteer work at the Y. He’s also an intentional father ensuring he leaves a legacy for his children to follow.

A fun fact about Marcus’ family is the only time they can ALL agree on the same food is when it is pizza.

Alvin is a volunteer at the Park South YMCA working to educate the members about fitness. As he works out in the fitness area he always gives out words of encouragement to the members and holds small prayer groups amongst the members.

Alvin has three wonderful children. They are grown, not married, and have no grandchildren. However, they have successful careers. He loves his family!

Brandon is super involved with his family. His oldest daughter attends the Plano Preschool program and outside of dropping and picking up, he gives numerous hours of community service to that Y.

Brandon says his life might literally revolve around the Y as he and his wife are the second generation in her family to meet at the Y and she is a 3rd generation Y worker. Every day is a new adventure with his kids; just getting to do or introduce them to new things or things I grew up doing might be his favorite thing.

Mark Pierce is known as Papa Bear around here. He is fiercely loving, loyal, and protective of me and our three daughters. He understands the value of being present for his girls. Whether it is taking the girls to school, picking up lunch for them and having lunch with his girls in a noisy cafeteria, or signing up for every single Adventure Guide weekend, this man pours into his children with devotion.

He says the best part of being a dad is just being a part of their journey. His family loves to play Uno and their youngest daughter always wins…I mean, always.

Christopher says The best part of being a dad is seeing his kids excel and giving them the knowledge they need to take on whatever is in front of them. He loves to see his kids get out of their boxes to try something new, something different, or out of their comfort zone.  His family has been able to participate in the Turkey Trot and the most impactful thing has been Y sports. It’s provided so many learning experiences for him as a coach, a dad, and a mentor.

Walter loves being the "sage", or the one to come to for advice. All of his children are adults so it's amazing watching them being parents. He and his wife have 16 grandchildren and 2 great-grandchildren. He and his family are avid campaigners of the Y. Walter has been a YMCA summer camp volunteer in California and is even a YMCA ragger!

YMCA Ragger - The Raggers program allows campers to set individual goals for themselves focused on developing stronger body, mind, and spirit. Rags are deeply embedded in the DNA of the YMCA, and Y camps across the United States provide the Challenge of the Rag to their campers.

Eric has been a member of the YMCA for over 10 years and is a consistent volunteer coach in our youth sports department. He routinely coaches multiple teams and his parents are his biggest fan as he works with kids of all abilities and ages.

Eric says the greatest part about being a dad is experiencing life with his sons, celebrating their accomplishments, correcting their mistakes, and coaching them in sports and life. A fun fact about their family is that they love coming up with jokes and freestyling when traveling.

Jackson has made a goal to take his two daughters on a date each week. During this time he makes sure to spend a few minutes discussing family values, and goals for the future, and has already been teaching them how to save money. But it’s not all seriousness.

Jackson said being a father has been without a doubt, is his greatest source of achievement, pride, and inspiration. Fatherhood has taught him about unconditional love, reinforced the importance of giving back, and taught him how to be a better person.

Chris is the father of the active YMCA PPP girls (Paisley, Penelope, and Paige). All three girls participate in activities at Park South and Irving Community while Chris coaches their sports teams in Irving. Chris has exemplified the idea of a girl dad and magnified the mission of the YMCA through his volunteerism and family.

Edgar has been involved with YMCA programs coaching youth sports for over 5 years and continues to set an example of leadership by giving back to the community year after year. He has three handsome young men and a beautiful princess! Seeing his kids play at the soccer games in the west Dallas community and being part of their wins and losses is the best part of being a dad!

A fun fact about the Alvarez family is that they love to cook outside on the grill and even their pets Sophie, Rocky, and Lloyd enjoy too! They are moments they cherish in their hearts and traditions!