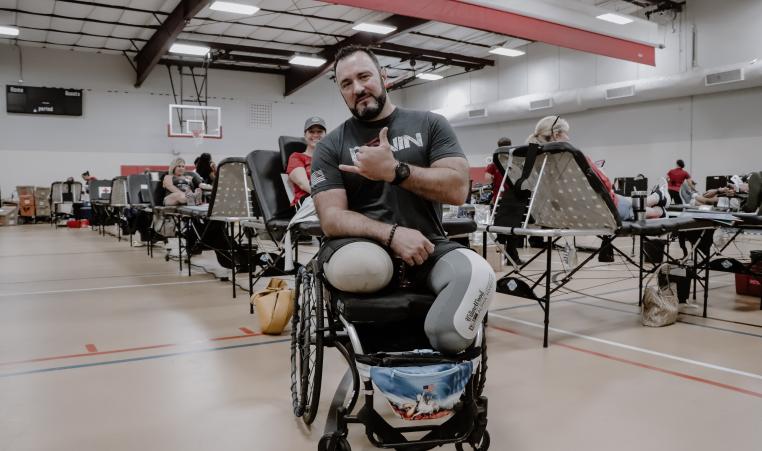 On September 11th, the Cross Timbers Y hosted their second annual Dan Licardo Blood Drive. Run by the Summit Club of Flower Mound, a men’s philanthropic organization, the blood drive is in honor of Dan Licardo, a former Navy Seal, and all military heroes and their service to our country. We sit down with Dan Licardo to hear his story and the importance of the blood drive.

“The whole reason this blood drive came about was the accident I had on September 4, 2018. I was a Navy Seal for 16 years and due to dramatic brain injury from being exposed to too many explosions I started having seizures in 2016. I only had a handful and typically they were always at night while I was asleep, but unfortunately on September 4th of 2018, I had a seizure while I was driving. I slammed into a tree going about 60 miles an hour. The result of that accident was the loss of my legs and having the majority of my body broken up. It took the doctors about 94 units of blood to keep me alive. While talking to those that were at the scene of the accident to the surgeons and nurses, everyone told me that if everything had gone perfect that night- I should have been dead twice.”

Dom McDanald, Vice President of the Summit Club, explained that the blood drive was put together in just four days last year with the help from the Red Cross and the Cross Timbers YMCA. “There were so many people her on the 11th that we had to bring a bus back the following day on the 12th to pick up all the people that couldn’t donate that day.” Licardo was humbled by the amount of support from friends and family being there for him after the accident and the steps they took to raise awareness of blood donation in their community.

“I didn’t realize how perishable blood is in regard to the need for hospitals. Blood has about eight weeks of shelf life and hospitals commonly run out of blood supply. If the hospital is out of the specific type of blood needed for an operation, they have to call the Red Cross for more units which can take upwards to an hour at times. That can be fatal for those in need of an emergency surgery.” Licardo explained to us.

“It’s the reason that this blood drive is so near and dear to my heart. It’s humbling to say the least the amount of people who are here today at our blood drive. My grandfather told me the true measure of a man is how he treats someone who can do nothing for him, so I always strive to be good to everyone I meet. I feel that this blood drive has been an effect from that measurement, and I’ll take it.”