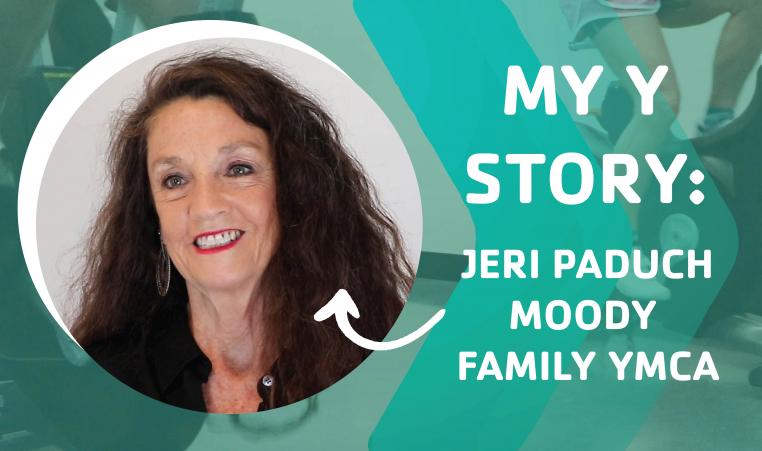 This July, Jeri Paduch, Moody Family YMCA YGX Instructor, will be celebrating her 30-year anniversary of being a group exercise instructor for the Dallas YMCA. She currently teaches cycle and yoga, but throughout the years Jeri has taught a wide range of classes from mini trampoline cardio to step and mommy and me classes.

“I was working downtown, and there was the Downtown Y, now known as the T. Boone Pickens YMCA,” Jeri said. “So, I joined the Downtown Y, went to a lot of classes and just loved it. One day in class the instructor at the time just handed me a microphone and said, why don’t you try this? And…. I got hooked. I went home, I started practicing with music and teaching myself how to queue and have really been teaching ever since.”

Even though she began her Y journey at the T. Boone Pickens Y in Downtown Dallas, Jeri quickly found her way to what has been her home ever since- the Moody Family Y, known at the time as the Park Cities YMCA.

“I would get calls a couple of times from different (YMCA Dallas) Y’s to substitute teach at. I came to the Park Cities Y as a substitute one day, and said, I need to be here! This is where I want to be!”

From the very beginning, Jeri’s passion and dedication for teaching is one of the reasons for her long-term supporters. She carries a unique gift of not only getting people inspired to partake in her group ex classes, but she takes the time to individually known each one of her members.

“I have been taking Jeri’s classes since 1998” says Missy Pearcy, Moody Family Y member. “Jeri has such a larger following because she works really hard to make her classes enjoyable for everyone. She takes the time to get to know the people who take her classes and to know and responds to their likes and dislikes. She spends a great deal of time putting her playlists together and she includes music that she knows her class members will enjoy.”

Many of Jeri’s lifelong friends have been made through the Y. For the last 30 years, Jeri has not only taught their group ex classes, but also celebrated birthdays, holidays, and the good times and bad with her Y friends.

“I was 8 years old when I joined the Moody Family Y” Cylde Jackson, long term Moody Family YMCA member, says. “I have known Jeri for more than 25 years at least and have done every class she has offered besides yoga. She has a great heart, is very smart, and we have so many memorable moments that consist of lots of joking and love for all.”

For Jeri, group ex classes change throughout the years but the commitment the Y has to the community hasn’t. It’s one of the main reasons Jeri has been with the Y for 30 years now and why she is so dedicated to her class members.

“That feeling of openness and friendliness at the Moody Y is a huge reason why I stay- it’s just a happy place to be as corny as those sounds. For the last couple of years, I have worked on the Moody Family YMCA Annual Campaign, and I have seen what the Y does. I kind of knew, but really seeing what the Y does to help people in need; it’s just more than a fitness place.”