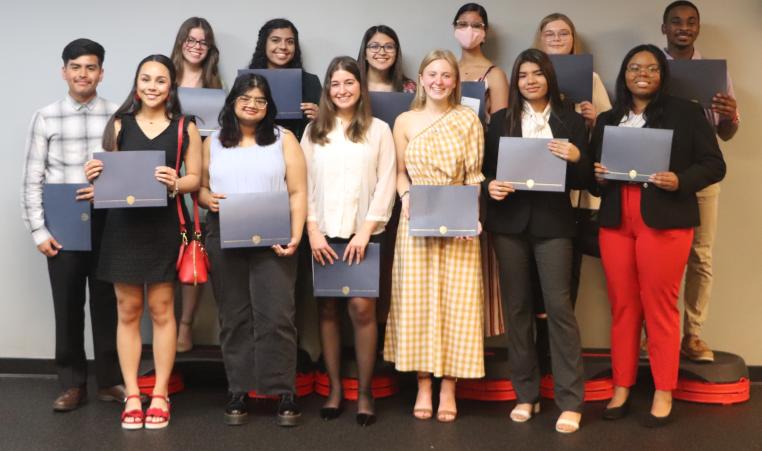 “These funds are provided by individuals who deeply believe that a college education is a contributing factor to an individual’s success,” said Kathryn Allen, President of the YMCA of Metropolitan Dallas Foundation. “We hope that college will inspire them to become lifelong agents of change.”

Funds for the scholarships are renewable over the span of four years and made possible through the Carl B. and Florence E. King and the F.W. and Bessie A. Dye Foundations. The Fina Foundation and the Jack C. Phipps Fund are included in contributions. These funds were given to the Dallas Y’s Foundation to provide post-secondary scholarships for local high school students and can be subject to certain items and conditions. YMCA Scholarships along with the King and Dye Scholarships are provided to students based on grades, college entrance exam scores, community involvement, achievements, financial needs, and the student desire to attend and complete college.

Students awarded scholarships and selected schools are as follows:

The first gift to the Endowment Fund was made by E.R. Brown, Chairman of the YMCA Board of Directors from 1919-to 1934. The will of Mr. Brown established a Trust to pay the YMCA and his church $1,000 annually for maintenance, upkeep, and operation.  In the intervening years, many gifts have been received from those with similar interests for the perpetuity of the mission and growth of the YMCA’s service to youth and families of the greater Dallas area.

A majority of the scholarships awarded to the students are from the F.W. & Bessie A. Dye Foundation Scholarship fund and the remaining scholarships are funded through community gifts and donated gifts to the YMCA of Metropolitan Dallas Foundation.

The Y is one of the nation’s leading nonprofits strengthening communities through youth development, healthy living, and social responsibility. The YMCA of Metropolitan Dallas serves thousands of men, women, and children each year, regardless of age, income, or background. Anchored in 21 North Texas communities, the Dallas Y has the long-standing relationships and physical presence not just to promise, but to deliver, lasting personal and social change. The Y ensures all people have equitable access to the essentials needed to become thriving members of the community. Daily, the Y bridges and fills individual and community needs as a catalyst for impactful change. The YMCA makes accessible the support and opportunities that empower people and communities to learn, grow and thrive, with three areas of focus: Youth Development, Healthy Living, and Social Responsibility. To learn more or get involved in improving our local communities, have opportunities to make an impact, and support your neighbors, please visit us at www.ymcadallas.org.