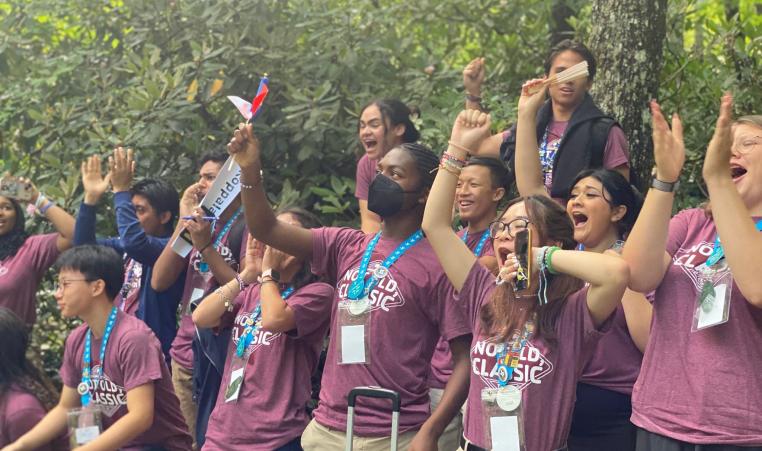 This past week, 15 Texas delegates were selected to attend The Conference On National Affairs (CONA) July 2nd - 7th. Daniel Gonzalez, Haley Salas, Kalea Roach, Ciara Brown, Arnav Koppala, Christine Olivarez, James Lee, Seleste Long, Dixon Wu, Joshua Lee, Eliza Uhlenhaker, Lindsey Khuu, Kara Bell, and Sahib Kaur. One of our attendees, Seleste Long, attended as a media delegate to help cover the conference and learn more material to bring back to Texas. These select individuals competed at nationals, representing the state of Texas. Over the summer, the delegates prepared their proposals and practiced on zoom calls to learn the procedures for CONA. The unique thing about this group is that they all come from different backgrounds but are all united. They applied and attended the conference because of their passion for improving the country and meeting with peers to address these issues.

Everyone was a bit nervous the first time the group met in person but could still communicate and get through their preparatory meeting. On an early Saturday morning, it was time for the students to fly out of Dallas, Texas, and make their way to Charlotte, North Carolina. As they arrived in Charlotte, it was time to take a two-hour bus ride to the black mountain, also known as the YMCA Blue Ridge Assembly. Before they came on the mountain, they stopped at Ingles, a grocery store at the bottom of the mountain. They bought a lot of Cheerwine for the group because it is a big tradition at CONA, and it was necessary to participate in the never-ending trend. They also saw a lovely view of the mountains and were able to spot Eureka, one of the main buildings at Blue Ridge. When they arrived, it was a bit of a wait until they could go to their rooms, but many other states that had already arrived came to greet Texas. After a while, they were sent to their room to put away their luggage but taking everything upstairs was quite a hustle. Pin trades at CONA are quite wild because people will do anything for a pin, such as carrying your luggage to get a trade, but luckily none of us let that happen for a pin.

After a long day of travel, the next morning was the first official day of CONA. We had an opening ceremony outside, and we got to see our outstanding Presiding Officer, who was chosen to come back as a leader from Texas, Vivienne Garner, and also scream for Kalea Roach and Sahib Kaur for carrying the Texas placker and flag. The first day was a bit tough because we had to adjust to walking up and down the mountain, but it was all worth it.

It was seersucker day, picture day, and the dance on Tuesday. Even though it rained when the dance was about to start, everyone was still dressed up in their 90s-themed outfits. It was entertaining to see all of the Texas delegates connecting well, and it seemed as if they had known each other their whole lives.

On Wednesday General Assembly (GA) started, and three proposals from Texas advanced to GA. Getting your proposal to GA has to move from the Third Committee, and then they will be assigned to one of the two GA rooms. In Third Committee, the delegated in each room has to rank each proposal, and whichever proposals were ranked high get moved to GA. One of the proposals was by Sahib Kaur from Dallas: “To unfreeze Afghan assets in US reserves by allocating all assets to the central bank of Afghanistan and supporting UN appeals.” This proposal was well debated in GA and was successfully passed. Lindsey Khuu from Dallas proposal was also advanced to GA, and the title was, “To decriminalize all forms of consensual sex work in the United States.” This proposal was well debated and was a big accomplishment for Lindsey this year for getting her bid moved to GA.

Last, Kara Bell from Dallas proposal advanced to GA and was titled, “To replace the current voting systems in place at the federal level with Ranked-Choice Voting to promote democracy and progression.” This proposal was also well debated and was passed in GA. Later that evening, we had free time for 4 hours before returning to GA. Some enjoyed hiking together, others played cards, and some talked and then went to sleep. During this time, we could hang out with each other more and get to know one another better.

Texas also had other outstanding speakers. Though they may not have advanced to GA, they presented their proposals well and successfully went through the rest of the conference. Here are all their proposal titles:

On Thursday, the last day of CONA, we had a Plenary session where all delegates were in the Heaton auditorium debating on the highest-rated proposals from each Third Committee Hearing Group. The night before the Texas delegation meeting, all representatives decided to help each other out in Plenary by raising all of their plackers if one wanted to speak pro or con. This method helped Texas speak during the Plenary session and was a big show of teamwork. That night was quite emotional because it was the awards ceremony, the last broadcast, and the fire ceremony. At the fire ceremony, many of us realized that it was the last night of CONA, and many of our friends were getting on a bus about to leave. Everyone hugged, took many pictures, and said their last goodbyes during this moment.

When it was time for Texas to leave, we received our warm and fuzzies. It was such a sweet moment for each of us because of how we built relationships in a matter of a week. When we arrived at the airport, waiting to board, we played card games on the floor and enjoyed each other’s company one last time before leaving.

All the Texas delegates connected very well throughout the trip. Every day we would eat breakfast, lunch, and dinner together and laugh the entire time. The laughter never stopped at our cafeteria table; it would carry to our delegation meetings, night assemblies, our rooms, and even when we travel. There was never a day Texas didn’t have an inside joke and random outbursts of laughter together. One time, a student thought that the shortbread was cornbread. He stated very confidently, “This cornbread tastes like cake!.” Another funny thing that happened was when one of the students was doing a card magic trick at the table where we would have to sort the cards by color without seeing the actual card. He would ask, “are you sure?” whenever we wanted a card to go in a pile. We can’t forget the confusing thermostat; it was quite confusing, and many of us shivered in our sleep. This isn’t even all of the jokes we had at the conference; there are many more that occurred.

Even though we all come from different places and backgrounds, it was easy for us to unite. We went to this conference unaware of what to expect because none of us had been in person before, but we all grew and took a big step at using our voices to speak on topics we care about and learn from our peers.

ABOUT CONA: The YMCA Youth Conference on National Affairs was started in 1968 as a follow-up to the outstanding state’s Youth in Government programs conducted by the YMCA throughout the US. The success of the conference is directly attributed to the leadership of many YMCA Professionals and Laymen but primarily to the dedication of the Youth involved. This program offers unusual opportunities for a young person to do research in the area of National and International concern; organize this information into a documented proposal; engage in intensive discussion and debate these proposals with understanding young people from other states.