CONFIDENCE AT THE CAPITOL 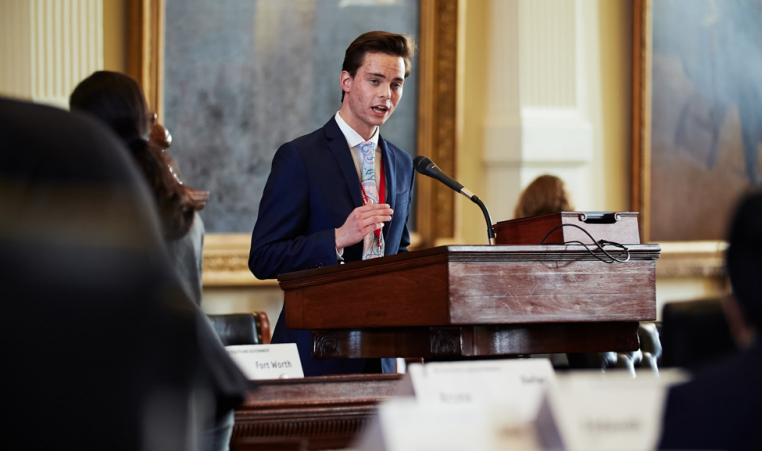 Over 500 high school students loaded buses on Thursday, January 30th to make the commute to Austin, Texas for the annual Youth and Government State Conference. This year, 33 schools across 18 public school districts and private systems in the Dallas Metropolitan area participated in civic engagement, civic discourse and public speaking at the capitol of Texas.

The conference was led by Texas Officers Youth Lt. Governor, Alex Searles (McKinney YMCA), Attorney General, London Jones (Coppell YMCA), Print-Editor-in-Chief, Auyana Aird (Oak Cliff YMCA), Chief Justice, Sebastiane Caballes (Oak Cliff YMCA) and State Affairs Forum Chair, Nikash Harapanahalli (Semones YMCA). The weekend was filled with electric energy as all branches of Texas Government and Media were simulated to embody how our government works. With the help from 64 volunteers and 20 dedicated YMCA staff, the conference was made as a memory our Youth and Government students will never forget.

As always, Dallas did very well in awards representation and six new officers from Dallas will serve in the coming year, including the new Youth Governor, Vivienne Garner, and other elected officers from the McKinney, Oak Cliff and Duncanville YMCAs. The top performing delegates will apply and be selected to attend the Conference of National Affairs (also known as CONA) this June and three top ranking Mock Trial Teams and Judges will advance to the National Judicial Competition in Chicago this July.

We are so proud of all of Youth and Government students and cannot thank our volunteers and staff enough for all the work they put in to make this year another success. We can’t wait till next year!