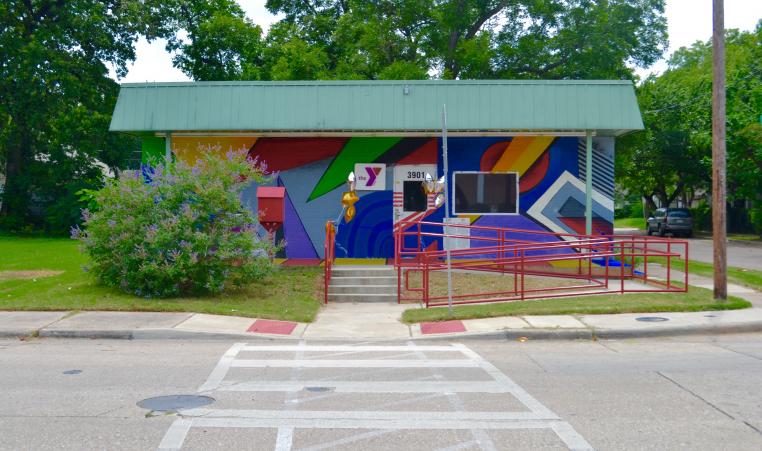 From an old brick wall to a new vibrant mural, Park South celebrated their updated preschool on with a ribbon cutting ceremony. The mural, created by artist Ebony Lewis, encompasses the childlike wonder and excitement through its bright colors and creative use of shapes and patterns. With the help from both the neighborhood and kids from the Park South YMCA, Lewis was able to live out her mission of helping kids through art. Sitting down with Ebony Lewis, we dive into her purpose and background with serving kids through art education.

“I have been painting and drawing all my life. As far as painting goes, whenever I was going into 9th grade my father passed away and during that time I walked into a Hobby Lobby and saw that they were offering painting classes. That’s where I started to paint and after that I just kind of fell in love with it.”

From the beginning, Lewis was excited to create a piece that would inspire both the neighborhood and the kids learning in the building each day. “When I first looked at the building, I kept thinking to myself children are going into this space, and there’s no color- it's just plain brick. It needed some more color and vibrancy and that really became the inspiration. The kids really inspired me to think outside the box and not be so controlled. As an artist, I am used to being in control and wanting things a certain way and the kids really just wanted to paint and go crazy! I had to let go of that control, but it was great.”

Throughout the project, Lewis had the opportunity to engage with the community and see their everyday lives. Being able to create this mural allowed Lewis to live out her mission of serving children through the importance of art. “Art is extremely impactful on kids” Lewis states. “A lot of the kids helping told me that they don’t even have art class at school, and I know being creative and having that creative avenue for me was extremely beneficial to my thought process and cognitive thinking. It was heart breaking hearing that they didn’t have an art class, so I wanted to give them that outlook in order to use their creativity for good.”