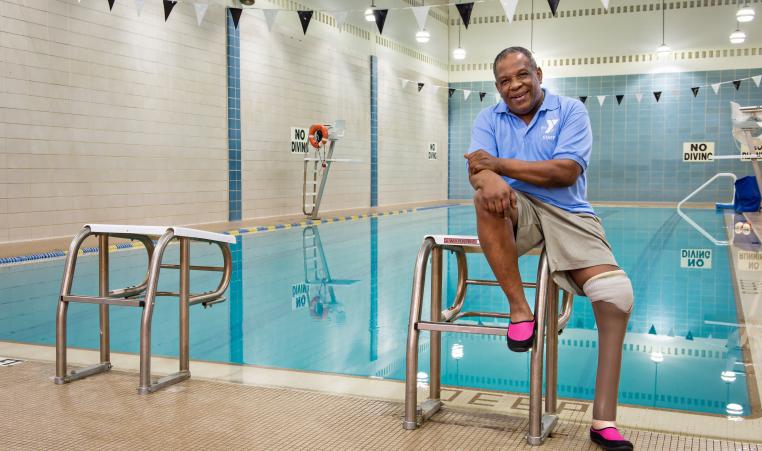 As an amputee Larry Christopher was looking for a place to get healthier and provide him a type of activity that could accommodate his limited mobility. For a while, he was working out on machines at the Park South YMCA. Every day he would see older folks come in laughing and having a good time so he asked where they were going. The answer was swimming. Larry went and peered through the big glass windows to the pool downstairs. Swimming is a good exercise, so Larry thought he might try it.

Larry started swimming but it was difficult without an elevator in the Y having to maneuver the stairs, especially going back up after a workout. Soon he saw a new elevator being put in the Y, wow he thought they are doing that for me. Larry began building confidence in the water with the help of staff and progressed to the deep end. In getting into the deep end he had to sit on an old bench, remove his prosthetic and hop to the pool. A couple of days later he saw Tori, the Program Director, assembling a new bench. Again Larry thought wow, they are doing this for me. In hopping from the bench a few days later Larry stumbled a bit because the deck was slick. He didn’t think anyone noticed but a couple of days later Tori bought him some swim shoes so he wouldn’t slip. Through these simple gestures Larry felt very loved and supported by the staff of the Park South Y, he truly felt part of a community.