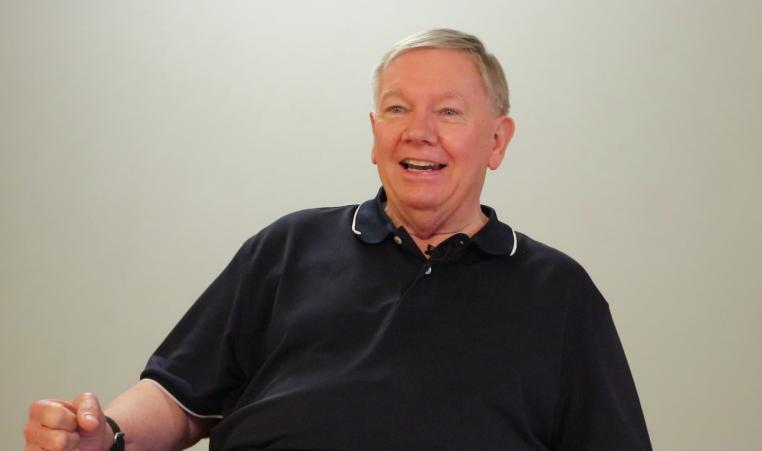 My name is Steve Shepherd and I came to Dallas to go to Graduate School at SMU in the early 1970’s having my first job afterward located in Downtown.  Being a small town kid who had gone to undergraduate school at TCU, I was thrilled to finally be in the Big City living close to the CBD.

During that period of my life, I began working out and running daily while going to various athletic clubs always convenient to work so I would be able to make the time to go.  I remained very active all those years which I felt was vital to keeping healthy.

As the years passed and carrying additional weight, I transitioned from running and other high impact activities to the stationery bike when I was 55 after experiencing knee issues on the advice from my Dr.  Shortly afterward, my partner Oliver (since 1979, now spouse since 2014) and I moved to the CBD in March, 2005 about a 6 minute walk from the Y.  We considered leaving the facility we worked out at in Uptown where we previously moved from, but found the Y outdated and stayed where we were.  When we were made aware of the marvelous redo T. Boone Pickens had so graciously funded, we looked again and found this state of the art facility and joined on the spot even though still under renovation. I was recruited for the Board and gladly joined in 2009 and am still an active member, being one of the first openly gay out board members.

We continued to use this fantastic facility and have always touted what it had to offer.  In 2015, I decided to take advantage of the personal training offered and decided to begin sessions with Craig Frantz who was highly recommended and specialized in those clients who had issues like bone on bone knees that were making it more difficult to do certain everyday activities.

I feel so lucky to have been able to continue my twice a week sessions from then until now and have been pleased with what it has done for me, not just physically, but mentally as one deals with becoming older.

On January 2, 2020 I was at home that morning, dressed for going to the Y to use the treadmill when I tripped over a ladder leg sticking out of the pantry.  I foolishly was reading a message on my phone, walking to my desk to send a document and hit the travertine floor with a thud.  Wow – I will never forget that feeling knowing it was serious ending up being transferred to Baylor undergoing traumatic surgery for a broken femur ending up with a titanium rod, pins and screws to put me back together.  Let’s just say it was a tough rehab being over 70 with two bad knees and as the surgeon kindly said, slightly overweight.  I remember him saying when he saw all the muscle around my pelvis, he knew with a lot of work, I could totally recover.  I thought of all the work I had done at the Y and with Craig for me to be in a condition where this could happen.  I was determined to fully recover and get my life back.

I began with home health care and graduated to sessions at Landry Rehab at Baylor with an excellent Physical Therapist, but was only approved for a limited time.  I progressed a great deal and before I left was only using a cane as needed.  However, during this time of Covid worsening and facilities being shut down, I was concerned with being on my own and quite honestly, scared that I couldn’t go back to the Y to continue with my rehabilitation.  Our condo building had begun planning an update for our on premises workout facility and had demoed what had been there waiting for permits to begin the upgrades.  Then Covid brought everything to a halt with permits, etc. so working out at home was not an option.  I did what I could with instruction from my Landry Therapist, but knew I needed someone to push me.  Craig was to inform me when the Y reopened and it was ok for him to work with me in a secluded area.  Finally he called and they had found a platform I could work out on in  a closed area with us both being masked and as distanced as possible.  I was so thankful and grateful that I had the opportunity to continue.  Craig pushed me and made me believe I could do things I just didn’t think possible.  Many times I would think I would never get back to being like I was.

By summer I was moving pretty well even with the bone on bone issues for both knees that had been ongoing.  My orthopedic Doctor had been giving me steroid injections every 6 months to manage the discomfort and by late September I was due for another round.  When they did the Xrays, he came back in and said there had been so much deterioration the shots would no longer help and the time had come to consider knee replacement.  I needed a release from the trauma surgeon first.  Once he had checked out the femur repair, he gave me the go ahead and I was referred to an orthopedic surgeon.  I was determined to do both at once, but was not a candidate because of the femur repair and the risk of infection.  I was scheduled for my right knee November 12th and was determined to be in the best shape possible and continued my sessions with Craig up until my surgery.  After successful replacement and 3 weeks at Landry with the same therapist, I was then back at the Y continuing with Craig and making remarkable progress knowing we would be repeating it all as soon as 90 days had passed.  I was determined and had my second replacement on February 22nd, again 3 weeks at Landry then back at the Y.

I could finally see a light at the end of the tunnel and continued with my personal training with Craig twice a week.

So here we are today – averaging 11,000 steps a day and doing things with my knees I had not done in 15+ years.  With the help of Craig pushing me when I told him I couldn’t do squats, he convinced me to start with the TRX suspension system to help with balance.  Now I’m even able to do them without TRX.

Last week I returned to my orthopedic surgeon and after the Xrays he came in and asked how I was progressing.  I stood up with tears flowing down my face and did a squat.  He shook his head and said guess I’ll see you next February for final X-rays as you are back.  It sure sounded good!

Yes, it was all an ordeal, but after 17 months of continual rehab, I’m on my way to being better than ever with a new lease on life, looking forward, hopefully, to many more healthy and productive years.

I am so blessed to have been able to continue my training sessions at the Y as allowed by Covid protocols and will always have a huge debt of gratitude to Craig Franz for pushing me when I really needed it.

I hope people come back to the Y and also think about improving their lives by taking advantage of not only the excellent Personal Training Programs, but also the many classes that are coming back weekly.

It is a privilege to be a member of the Y Family.