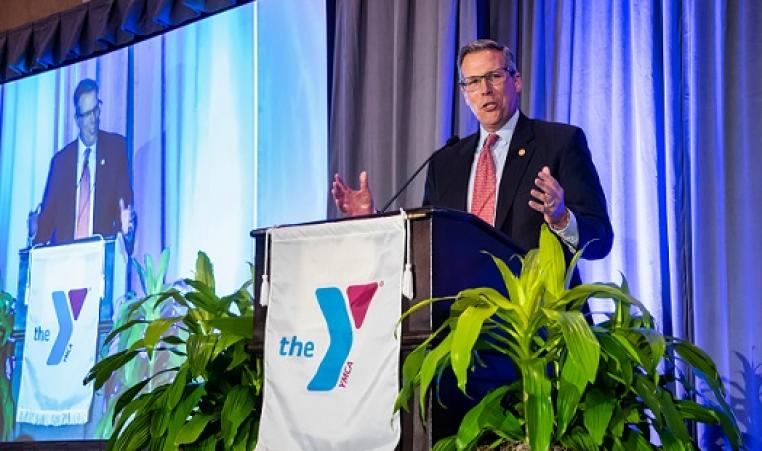 DALLAS (May 19, 2021) – The YMCA of Metropolitan Dallas held its 135th Annual Celebration on Tuesday, honoring the volunteers that have tirelessly served the community throughout a difficult year, and recognizing the impact of the Catalyst Initiative, the Y’s COVID response effort.

“The Y’s mission includes ensuring we keep our community healthy in spirit, mind and body. When people are in need, the Y and its staff and volunteers have always been there and we will continue to provide much needed services to the community,” said Curt Hazelbaker, President and CEO, YMCA of Metropolitan Dallas. “This was a fitting way to celebrate the 135th anniversary of the YMCA in Dallas. Since 1885, we have adapted to meet our communities where they are and 2020 was no different. Though last year was a challenging one for many of us, the Y's commitment to meeting the changing needs of our communities shone brightly.”

Since the beginning of the pandemic, the Dallas YMCA has served more than 83,000 people, provided more than 357,0000 pounds of produce to those in need, more than 92,000 meals, held 51 blood drives, had more than 7,200 children visit the YMCA’s Emergency Childcare and Learning Academy, provided 2,250 kids with school supplies and 450 laptops so children could learn virtually. When the winter storm hit Dallas in February, the YMCA branches opened as winter warming centers, serving more than 1,100 people.

“As our staff and volunteers were personally being impacted by the effects of COVID, they stepped up, more than ever before, to ensure others were being taken care of through food distribution, childcare, ensuring students had school supplies and computers, and delivering groceries and doing wellness checks with our seniors. I’m so proud of how we were able to serve others throughout this difficult year and I want to thank everyone who volunteered their time and resources,” continued Hazelbaker.

During the Annual Celebration, two long-time YMCA volunteers were recognized with the event’s top awards for their contributions to the YMCA and the community.

The YMCA also honors volunteers in each of the communities we serve. The following individuals received the Sam Winstead Volunteer of the Year awards:

The Y is one of the nation’s leading nonprofits strengthening communities through youth development, healthy living and social responsibility. The YMCA of Metropolitan Dallas serves thousands of men, women and children each year, regardless of age, income or background. Anchored in 21 North Texas communities, the Dallas Y has the long-standing relationships and physical presence not just to promise, but to deliver, lasting personal and social change. The Y ensures all people have equitable access to the essentials needed to become thriving members of the community. Daily, the Y bridges and fills individual and community needs as a catalyst for impactful change. The YMCA makes accessible the support and opportunities that empower people and communities to learn, grow and thrive, with three areas of focus: Youth Development, Healthy Living and Social Responsibility. To learn more or get involved in improving our local communities, have opportunities to make an impact and support your neighbors, please visit us at www.ymcadallas.org.