Due to ongoing COVID-19 concerns, everyone who enters a YMCA facility must wear a mask or face covering. LEARN MORE 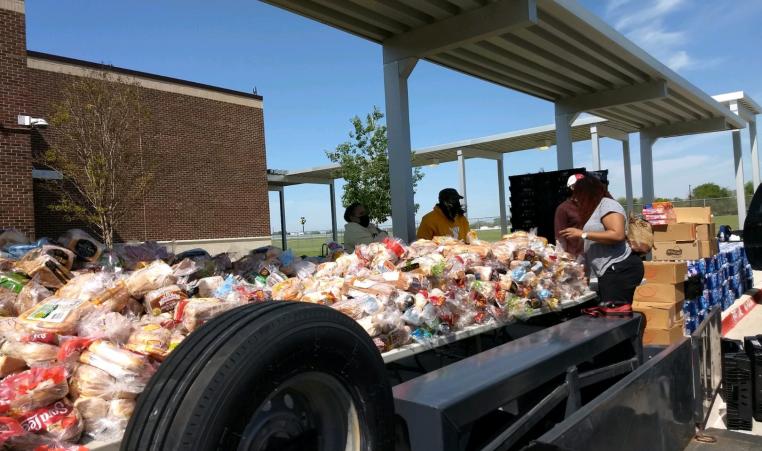 Wilmer, Texas (April 2, 2021) – The YMCA of Metropolitan Dallas partnered with Agape Connect and Emmanuel Wealthy Legacy Foundation to provide fresh produce and food to over 1,000 people on Good Friday, April 2nd. With the YMCA of Metropolitan Dallas’ donation of non-perishable food and Sprouts Grocery store donation of fresh produce, there was enough food to continue the food distribution to the next day, April 3rd.

"You don't always need a brick-and-mortar building to serve a community and the pop-up food distribution in Wilmer is a perfect example of how we show up in the community and put our Christian values into action," says Suzana Delgado-Gray, Executive Director and VP of Operations for the YMCA of Metropolitan Dallas.

“Wilmer is a small city snuggled right in the middle of a food dessert. This partnership with the Dallas YMCA allowed us to feed over 1,000 people. It was a major deal for the community to come out and volunteer not to mention we had representation from First Baptist Church in Wilmer, The American Black Cross, Rite-Way Trucking, The Buffalo Soldiers and The Embassy Church in Lancaster.  It’s amazing how you can impact a community "One Meal At A Time,” says Dr. Emmanuel Wealthy.

About the YMCA OF Metropolitan Dallas Catalyst Initiative

Since March 2020, the Dallas YMCA has served more than 75,000 people through its Catalyst Initiative (the Y’s COVID response program). The Dallas YMCA has provided 217,387 pounds of produce to people in need, 75,958 meals, served more than 3,300 children of essential workers in Emergency Child Care, distributed 450 laptops so kids could learn virtually and provided more than 1,700 students needed school supplies. The YMCA delivers groceries to at-risk seniors and does regular wellness checks to ensure our seniors feel mentally and physically connected to others during this time. During the recent winter storm, Dallas Y branches opened their doors as Winter Warming Centers serving over one-thousand people with warm spaces, water, food, power, showers, Wi-Fi and more to help those in need due to the snowstorms, power and water outages.

The Y is one of the nation’s leading nonprofits strengthening communities through youth development, healthy living and social responsibility. Founded in 1885, the YMCA of Metropolitan Dallas serves thousands of men, women and children each year, regardless of age, income or background. Anchored in communities across North Texas, the Dallas Y has the long-standing relationships and physical presence not just to promise, but to deliver, lasting personal and social change. The Y ensures all people have equitable access to the essentials needed to become thriving members of the community. Daily, the Y bridges and fills individual and community needs as a catalyst for impactful change. The YMCA makes accessible the support and opportunities that empower people and communities to learn, grow and thrive. This year, the Dallas Y celebrates 135 years of building stronger communities. Learn more about the Y at: www.ymcadallas.org.